EMPOWERING YOUNG GIRLS – Building Communities’ is an Initiative Africa designed project targeting mostly girls in grades 9 -12 who have a desire to graduate, as well as out of school youths who wish to improve their opportunities. The initiative is mainly about getting girls in secondary school and ensuring they receive a quality education to transform their future. It also provides entrepreneurship education to girls in secondary schools and to drop-outs who are keen to enter the employment world.

The project which targets 130,000 secondary students, mostly girls, is based on the Education for All (EFA) goals. Ensuring EFA is a global and national priority as a fundamental human right that enhances individual freedom as well as provides significant benefit to society as a whole. The project cost stands at SEK16 million with an implementation period of three years. The target regions are Addis Ababa, Amhara, Afar, Dire Dawa, Oromiya, SNNP and Tigray. It will be implemented in 110 schools across Ethiopia in 92 Woredas in 7 Regions in collaboration with region authorities, NGOs/CSOs and local communities, to ensure that over 130,000 young girls and boys in the targeted woredas have access to quality education and self-development opportunities.

The content of the project is composed of four inter-related components:

1. The barriers that keep girls out of secondary school;

3. Reduction of school violence against girls; and

To empower young girls and adolescents to reach their potential through quality education and preparation for life
The Specific Objectives of the project are to:

The overarching objective of the project is to help young girls to complete high school, giving them a better chance to find jobs and become independent. Promotion of girls’ education particularly at Secondary Level will bring certain benefits for the Society in the form of social development and reconstruction. Promotion of education of girls needs to be in the form of content and quality of schooling, teachers, materials, enrolments, convenience, retentions, acquisition of basic literacy and numeric skills.

Further this project will bring social development across variety of sectors, increasing economic productivity, political participation, health and sanitation, delayed marriage and making effective investment for future generation. Though there are many other possible ways and methods to achieve this national goal, but education of girls is an effective way which has simultaneous impact on all aspects.

To achieve this target, IA will:

which is formerly called Forum for Human Right and Development (FHRD) was established in 2005 and registered as indigenous Civil Society Organization & got license from SNNPR state Bureau of Justice and re-registered and licensed as Ethiopian Residents Charity in 2013.

COC is primarily instituted to help marginalized groups; like women, children, youth and disabled people help themselves; and envision seeing them actively participate in and benefit from the development process of the SNNPRS region. To this end, the organization has engaged itself in provision of care and support for orphan and vulnerable children and their guardians; economic empowerment of women and youth; creation of community awareness on social issues like HIV/AIDS; mitigation/ elimination of harmful traditional practices and gender based violence; improvement of quality of education; and environmental protection and management.
More – http://www.centerofconcern.org.et

ETA is the oldest professional association representing teachers and education personnel in Ethiopia, was established in 1949 and it has now more than 401,026 members recruited from pre primary to university. ETA is member of Education International (EI) who is in turn member of the International Trade Union Confederation (ITUC). The main Purpose of establishment of ETA is to defend teachers’ rights and discharge responsibilities towards improving access to quality education for all citizens.

Accordingly, it has been working with national and international organizations. Since its establishment, ETA has been engaging in the country’s social, economical and political development. To affect its roles and responsibilities, ETA has organized and implemented different projects. More-http://www.ethiopianteachers.org

TDA was established in 1981 E.C. (1998 G.C.) in North America, in the city of Washington D.C, with great emotion and sense of Nationalism at the time of fierce struggle of the people of Tigrai. In order to protect the Tigrai people from the economical and social harm brought on by the struggle with the Derg regime the people agreed to organize an association which collects contribution of money and brings together knowledge and skills. This association later on came to be known as the Tigrai Development Association.

The main task of TDA is to alleviate all rounded socio – economic problems of the people of Tigrai with the help and support of its members and supporters.
More- http://www.tdaint.org

Youth and Cultural Development Foundation (YCDF) is a non-governmental, non-profit organization founded by youth development passionate leaders and social entrepreneurs. The organization is registered as an Ethiopian Charities and Societies Agency in 2013 with its headquarter in Addis Ababa and branches in Wolliso- S/W/Shewa Zonne, Oromiya Regional State and in Wolikite-Gurage Zone, Southern Nations and Nationalities and People (SNNP) Region of Ethiopia.

YCDF envisions seeing empowered, progressive and well equipped youths who are change agents in the development of their communities.
More – http://www.ycdfoundation.wix.com/ycdfoundation

The Ethiopia Scout Association was first introduced in Ethiopia in 1919 and chartered by an Imperial decree in 1950. It thrived until 1974. The movement resurfaced and rejoined the worldwide movement in 2002. Since then it has been ever growing, reaching and changing the lives of several young Ethiopians in all parts of the country.
Currently the Ethiopia Scout Association has over 68,000 Scouts. It has Regional Scout Councils in all the 9 regions and the 2 city Administrations.

As a movement based on the development of young people and enabling them to be active citizens contributing to their communities Scouting mainly focuses on the following Strategic Priority areas: More-https://www.facebook.com/pages/Ethiopia-Scout-Association/205650182813869?ref=ts&fref=ts

Light Ethiopia (LE) is a non-governmental and non-profit making development organization, which started its operation before 2011 and re-registered in 2012. LE registered by the Federal Democratic Republic of Ethiopia charity and society agency by the registration number 2805 to operate in all regional states, primarily on Tigray, Amhara, Addis Ababa, Oromia and SNNPR.

In addition to the main registration from charity and Society Agency Light Ethiopia signed an operational agreement with the respective regions such as Amhara and Oromia Regional States. https://www.facebook.com/lightethiopia?fref=ts

Ethiopian National Association of the Blind (ENAB) is a non-governmental non-profit making membership organization. It was founded on January 1, 1960. Currently it has 35 Branches found in different regions and localities throughout the country with a total of about 10,322 active members.
ENAB has been providing educational materials to blind students in many government schools, colleges and in Addis Ababa University. It is helping so many blind students to complete their education at the primary and intermediate level as well as at a higher institution level including Addis Ababa University.Ada Warka Tila Mahiber
Project Title- Learning Together – Tutorial by Volunteer Teachers

The AWTM was established on 15 March 2004 and was registered and licensed by the Federal Democratic republic of Ethiopia Charities and Societies Agency as an “Ethiopian Residents Charity” in accordance with the Charities and Societies Proclamation No. 621/2009. Abenezer Bezo Adragot Limat Mahiber
Project Title- Support to Tutorial after School Program for Nurturing and Safe Environment

Saint Mary Community Development Organization (SMCDO) is a nongovernmental, non profitable non-partisan charity organization established in 2003. The organization re-registered to the new charities and societies Agency on November 20, 2009 after passing through rigorous activities that makes it fit in to the new Societies and Charities Legislation.

WRDA strives to do its best to development and wants to see a society in which every citizen has equalaccess and opportunity to basic Education, nutritional food, primary health service and ultimately sustainably enhanced equitable and sustainable development.

The ‘EMPOWERING YOUNG GIRLS’ framework puts the rights based approach into practice; the project’s objectives have emerged from IA’s strong conviction that when women are educated, transformation begins. Education and active participation in schools enables women to become central agents of social change, changing the future for their children. 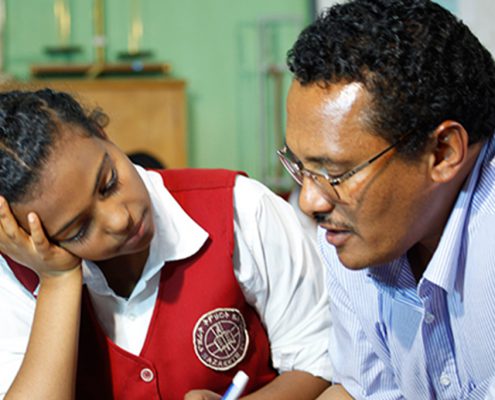 The project is simple: give, unprivileged girls the access to quality learning resources and support to empower them to change their own lives and the lives of the community in which they live. This is achieved by working with grassroots level NGOs/CSOs (sub-grantees) to support the ‘EMPOWERING YOUNG GIRLS’ project objectives. Sub-grantee partners are expected to bring technical knowhow, training, community organization knowledge and expertise, to meet the specific needs of students, teachers and schools.